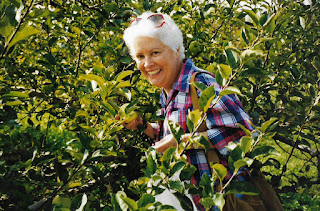 Mom died on January 25th; we're about to hit six months without her. She'd been sick for a long time, so this should not have been a surprise, but I never believed it was going to happen -- at least not as soon as it did. My poor stepfather, Don, had been calling me the week she died, telling me that he wasn't sure she would last until Friday (my plan was to drive down there that day), but I was sure he was exaggerating. It's a horrible defense mechanism -- I simply refuse to believe bad news and I'm really good at the whole denial thing. It does protect me emotionally, but I almost didn't get to see Mom one last time.

I talked with her over the phone on Tuesday, the 24th. She could speak, barely. I told her to wait for me and she told me she didn't think she could. And I talked with one of her nurses. They were moving her to hospice -- that shocked me into reality. I made quick plans to drive down the next day.

I don't remember the exact times, but I got to her room sometime Wednesday evening. Don was there as was my brother, David. When I walked in she looked up at me with surprise and said, "What...?" I think that was the last word I heard her say; I honestly don't remember. I have photographs of memories of that night, but nothing long and clear. She put her hand out toward me and I took it and said, "What am I doing here? I had to come and see you." I couldn't bring myself to add "...and say goodbye."

The television was going -- Food Network or HGTV -- those had been her constant companions over the last couple of years as she had grown progressively weaker and her world had shrunk until it consisted only of the living room and television.

Don was exhausted. He had taken such good care of Mom -- such, such sweet care -- and the guilt I feel today is less about what I did or didn't do for Mom than what I didn't do for him. We live about eleven hours apart. It was very hard for me to get down to Florida because Bruce, my husband, works in a different state and is gone during the week. We have dogs -- big dogs -- and kenneling them is not cheap. So the routine for the past year or so had been Bruce coming home on Thursday, me leaving on Friday and driving to Florida, Don leaving Saturday morning and spending the day and a night with friends, and me driving back home on Sunday. The purpose was really to give Don a very short break. You had to get up with Mom several times a night, so Don never really got a good night's rest. I would sleep on the couch the first night there so I could hear Mom in the guest bedroom and Don could sleep on Friday night. He slept at my aunt's on Saturday, coming home first thing on Sunday mornings. I gave him a short break, sure, but it was so minimal and I only came down once every few weeks. I should have helped more somehow.

Once I arrived at hospice, Don needed to go home to get some rest. I told him I'd stay the night. He left and it was just Mom and David and me. David went outside to smoke a cigarette and I was given a gift that I'll always remember. I moved as close to Mom as I could get and took her hand. She turned to look at me and I told her I was going to pray. I thanked God for giving me such a sweet mother. I prayed that she would know how much she was loved and I prayed that she would soon be in heaven with Jesus. (The worst part of Mom's death is my uncertainty with regard to her spiritual status. She was never very forthcoming, never really wanted to talk about it. She would sometimes say the right things, but never with enough certainty to give me peace.)

David came back and we sat there in silence (except for the dreadful television). I watched Mom's breaths and then suddenly she didn't take one. I watched and watched and then there was one more. But that was it. Her eyes stayed open, but she was gone.

Mom and I loved one another very much, but we were an odd pair. We had almost no interests in common outside of Alex, my son and her only grandchild. We were comfortable around one another and could easily spend days together and I don't ever remember us arguing -- ever. As she got older she'd get on my nerves occasionally and I'd bark at her and she'd stop doing whatever it was that had annoyed me. (For instance, Mom was a lifelong Democrat. She would always blame my conservative leanings on my father -- as though I inherited them the way I inherited my blue eyes and double chin. I got no credit for thinking about positions and coming to a different conclusion than she had, and one day I called her on it. She never mentioned it again.) But honestly -- the times we rubbed one another the wrong way are so minimal as to be not worth remembering.

So I've mourned Mom since she died, but what has surprised me has been the way her death has affected my emotions in unexpected ways. I cried almost no tears for Mom, but I've sobbed for the losses of others. I know that when I'm crying because someone I barely know has lost her brother I'm really crying because I've lost my mother. I have experienced more nostalgia this year -- an aching sadness tinged with sweetness (but mostly sadness) -- for earlier times. I've spent hours on Google Earth looking at places I lived twenty, thirty, forty years ago and mourning the changes. I know this is all related to the biggest loss I've felt so far -- and I know how blessed I was to have reached the age of 58 and not experienced any traumatic losses. (Yes, I lost Dad and all my grandparents, but for various reasons the losses were not as great as losing Mom.)

I have been acutely aware of how painful and difficult and broken this world is. I compare my easy first-world life to the lives of the majority of people throughout history and marvel that human beings have survived. I've prayed "Come, Lord Jesus" over and over. I've withdrawn from some activities and plunged deeper into others. The whole process has been interesting to observe.

Mostly I have been so grateful that God has made his presence abundantly clear this last half-year. He has guided, he has blessed, he has loved me exuberantly and lavishly every step of the way. I have a husband and son who are loving and kind and good. I have friends who know what is best for me sometimes better than I know myself and they have provided guidance and support and my only fear is that they don't know how much I love them. So this year has been the best of times and the worst of times -- but mostly best because in those worst times are fleeting glimpses of gold and I see God's work even through eyes filled with tears.