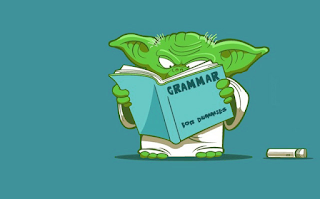 In yet one more sign that our civilization is crumbling, the choir sang an anthem this morning that contained this line:

"Unto us is born a King, He of whom the angels sing."

In order to give disapprobation to whom it is due, I will tell you who wrote the song. It's called "Unto Us" and the words and music are by Ed Kee and Brian Carr. I don't blame the choir (mostly).

Let's look at the beginning of Romans 10:14: "How then will they call on him in whom they have not believed? And how are they to believe in him of whom they have never heard?"

There are several ways to know that "He" is the incorrect pronoun in the choir anthem (besides it being jarring to the eye/ear and in case Romans 10:14 doesn't leap immediately to mind). The easiest is that "he" is the object in a sentence and "him" is the subject. Always (if they're used as pronouns; I can imagine someone naming a dog "Him" in which case these rules wouldn't necessarily apply). In the offending clause above, "He of whom the angels sing," the angels are the subject (they're the ones doing the verb -- singing) and "He" is the object (the one the verb is being done to, on, for, about, whatever). And we have already noted that "he" is not an object -- "him" is an object.

That's one way you can know when to use who/whom, by the way. Usually people know when to use "him" vs. "he." It's the who/whom that screws us up. Here's a quick-and-dirty way to know which to use. Let's take the sentence "Who went to the game with you?" And say I'm not sure about that "Who" -- should it be "Whom"? Answer the question: it's either "he went with me" or "him went with me." Since we know the correct grammar is "he went with me" we know that the correct word to use is "who."

It's really easy if you just think about it.

I know "whom" is going the way of the pterodactyl. I know languages grow, change, evolve. They will just not grow, change, or evolve because of me.

When I was on Facebook folks would occasionally find some "grammar Nazi" joke and tag me in it. I do have many flaws, but I think this was unfair. Not only do I almost never correct someone's grammar, most of the time I don't even notice it. If I'm not reading as an editor things often slip by me (life is easier this way). Not always -- I mean, as soon as I read the "He" in the above song it jumped out at me like a red flashing light. That's rare, though. But even if I notice it I wouldn't correct it. That's unkind. There are a couple of friends who tease me and I tease back and I'd correct them -- but it's not so much because they used incorrect grammar as that I caught them in a mistake.

I see no reason to remain in ignorance, however. In fact, no one should be willing to stay that way. It's why I always want to be corrected -- it's a great day if I can learn something. I'll never understand why everyone doesn't feel that way, but experience has taught me that most people are content to be wrong. Don't be one of them! No, it's not fun to be corrected. But it's so much worse to continue making the same mistake and later realizing it (and realizing that people have been hearing you make it over and over). Embrace correction!

All right, that's it for now. It's cold (48 degrees) and raining out. Today is our church's Christmas caroling expedition and I usually skip it. I was thinking of going this year, however, but I'd have to leave the house in about twenty minutes. I'm currently wearing jammies, sitting under a blanket, sipping hot tea...